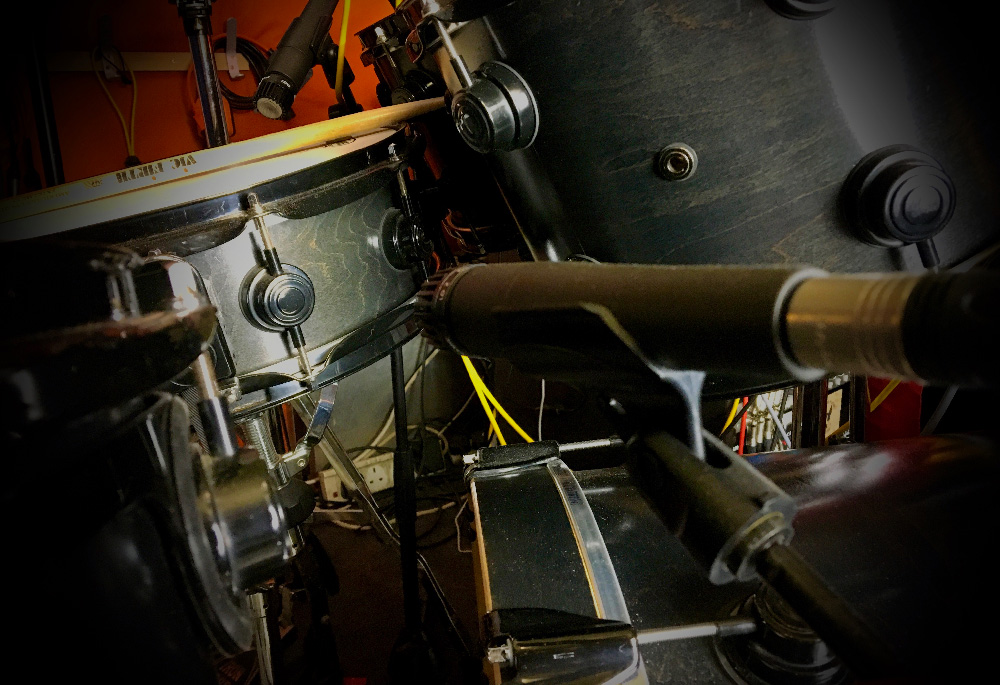 VURST? That’s SAUSAGE to you and me…

And YES – It does poke rudely amongst the drums like a proudly uninvited phallus.

I can only assume this is how the Vurst drum mic technique came to be so-named by it’s inventor, Moses Schneider, the “Einstein of drum recording”.

We’ve been experimenting with this technique, the results being so good that the Vurst now has a permanent place in the default Beat Shed drum recording setup.

Toad in the Hole

A fascinating sweet spot exists plumb in the middle of the drum shells where some extreme resonances and frequencies are all colliding. In a very good way. The Vurst captures this phenomena, which can be used to powerful effect in a final drum mix.

Near? Or just close-ish?

It’s neither strapped to the rim of a drum (nor inside it) nor hanging precariously from a stand on the other side of the “room”. And it’s not specific to any single source. It’s a kind of close/near/drums-only mic.

It’s picking up a GENERAL view of the drum shells and the cacophony surrounding them whilst keeping cymbal bleed to a minimum.

It’s a particularly good example as the whole drum sound was based around what we got from the Vurst during the session. The snare is RINGING like a fire bell, but with plenty of “character” coming from the other drums under heavy compression, it’s not too offensive when mixed with the other elements. So here it is in mute, solo and all together…

With no spare channels, we sacrificed the under-snare mic. This only ever got moderately tickled at the best of times if things got a little “pingy” and needed some “fizz” from the snare wires.

It turns out, because the Vurst is pointing at the shell of the snare, it’s picking up a whole turdload of crispy snare-wire along the way. Nothing lost, much gained!

In some situations, the Vurst could even (shock horror) replace the inside-kick mic too. It’s SO close to the kick beater that it’s getting some lovely “click” as well as some resonance off the front head of the kick drum.

So if you’re on a serious channel-budget you could use the vurst drum mic technique and save under-snare AND in/front/beater kick mic in one fell swoop.

I reckon with a front-kick mic, a single well-placed overhead and a Vurst (and a fair bit of EQ) you could get a completely workable drum sound with only 3 mics! Maybe we’ll try this someday…

One Sausage. Three Rules. A WORLD of different drum sounds.

It should (…no, it really MUST) be a dynamic mic. The “Swiss Army” SM57 is about perfect, but this technique works with just about anything… DYNAMIC. (A condenser will get very “brittle” thanks to Rule 3 below.)

2) The position is KEY

The sweet spot is very sweet but fairly small. Get a piece of string, tape it to the end of the mic and measure this thing out…

You need EQUIDISTANCE from the capsule to the centre of the snare head, tom heads, and kick beater where it contacts the front head. This can be tricky with a 5+ piece kit – the 2nd tom will probably be slightly further away but that’s fine – 4 out of 5 is AOK.

You want to start with it pointing square at the snare shell. Depending on the snare type/tuning/snare-slack, interesting results can be had by varying what it’s shining at – top rim, shell, bottom rim. Golden rule – move, record, listen, repeat until it sounds as fine as YOU like it…

Compress the DOGSNOT out of it.

How many times have you played around with drum compression, gone crazy and then thought it sounds incredible but… “It’s a bit extreme! I’d better back it off”?

Well… it’s happy days with the Vurst. This is one of the few opportunities you’ll get to slam the living monkeys out of your favourite compressor with impunity.

Get a nice working drum mix first. Leave the Vurst until last (sorry couldn’t help it..) and mute/turn right down. Select a compressor – software or hardware – something vintage that distorts nicely. Crank the threshold and ratio until it starts to sound smashed to pieces. Then turn the level right down on the vurst channel fader then bring up the rest of the drums around it. MAGIC HAPPENS! Then season to taste with the attack and release.

The Vurst is great if you are trying to record drum with limited channels. It’s great if you have loads of channels and want an extra flavour. It’s also great if you want a drum microphone that you can severely punish with processing to get an extreme sound for special occasions!

In other words… it’s esoteric, yet HIGHLY versatile.

The Vurst is a genius concept, from a truly brilliant engineer. Thank you Heir Schneider!