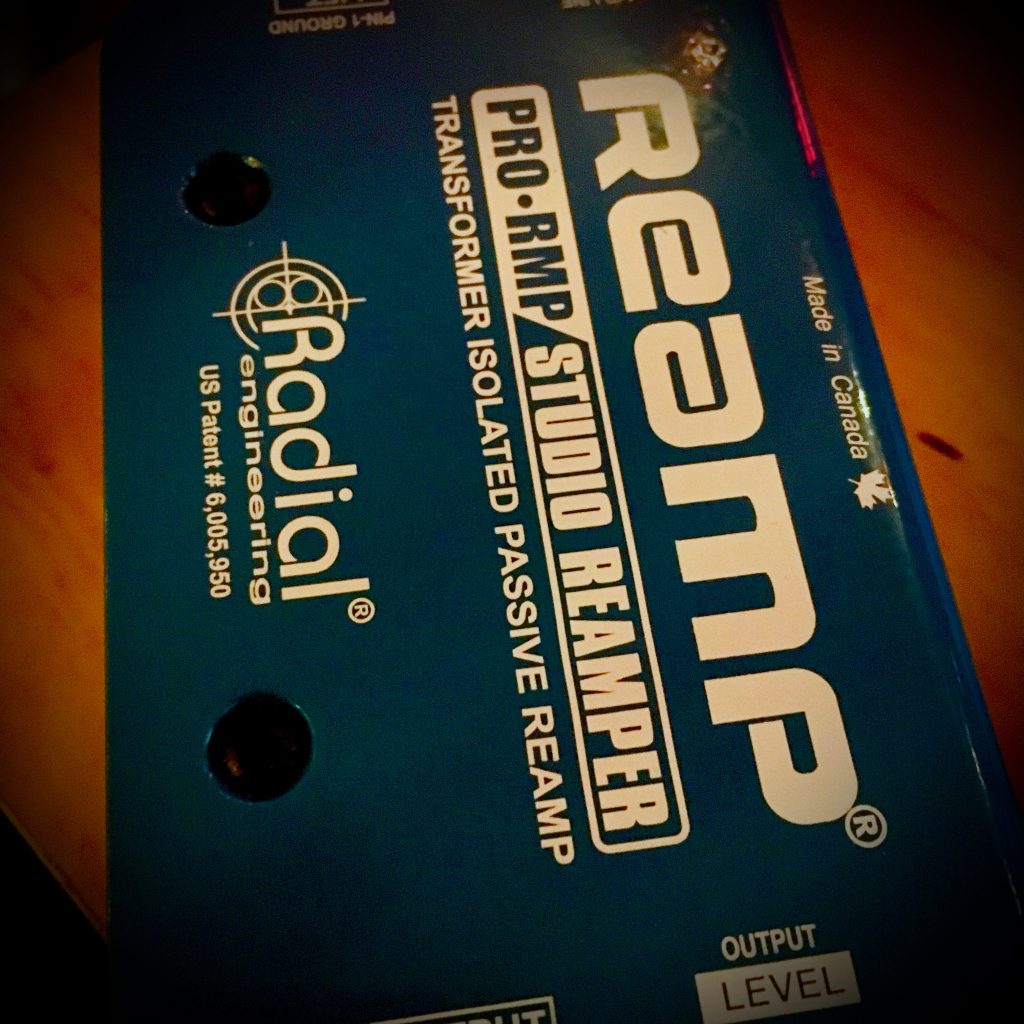 Not so much a review, more a story about the POWER of re-amping.

The Radial ProRMP REAMP box isn’t a whizz-bang box of tricks by any stretch. Although it looks a bit like an effects/stomp box – with no knobs or switches – it doesn’t do anything particularly sexy.

But as I started using it, broader horizons emerged, and the techniques it enabled me to explore became limitless…

DISCLOSURE – This article is NOT an advertorial. We bought the Radial ProRMP REAMP indirectly from Radial at RRP and have no relationship with the manufacturer whatsoever. This is just a good old-fashioned review. Written by The Beat Shed session drummer, Merlin Matthews.

WTF does it do?

It’s not what IT does. It’s what it allows YOU to do.

It’s very simple. The Radial ProRMP REAMP takes a line-level input (XLR) and spits out an instrument-level signal. That’s IT.

Take a moment to think about this though… it means you can take ANY signal or track in your DAW, point it to an output on your sound card/interface, hook it up to this box and VOILÀ! You have an instrument-level signal that you can re-amp, re-mic, “Re-Pramp”, use physical/analogue effects, and process until you’ve gone deaf…

You can then record (or “re-record”) the result back into your DAW.

So it’s just a DI box in reverse? What’s the difference?

Ok… So why not just use a DI box the other way around?

Well.. yes you can. But it’s not ideal. The key factors are ATTENUATION and IMPEDANCE. Or correcting attenuation and matching impedance to be more exact. Using a DI box in reverse you risk running into problems of noise-floor, problematic levels and possible ground loops. A DI box isn’t design to work that way around. A REAMP box is. It’s clever internal architechture makes it the best tool for the job.

Give it a line-level signal, and it will give you an “instrument” level with the correct impedance AND attenuation every time.

My friend Ryan over at Creative Sound Labs explains (much better than I can!) here – Do You Really Need a Reamp Box? – and demonstrates how a reamp box can be used with guitar effects here – How to Use Guitar Pedals as Effects in Your DAW instead of Plug Ins

When recording an instrument, taking a clean DI into the DAW is quite liberating.

No more worries about committing to the “perfect sound” right there on the spot. No more pressure to get the perfect performance AND the perfect tone at the same time.

The guitarist just shredded the finest solo know to humankind, but the sound licked monkeyballs?

No problem, just change, adapt and sculpt the perfect sound later by playing it back through various different amplifiers/effects/any settings in the signal chain on the way back in.

But the tone is KEY to my performance!

There is an argument to be had about playing TO the amp – performing to the actual “foldback” sound you’re committing to tape (any drummers out there!?)… but this doesn’t apply here.

Because if you ALSO have either a conventional DI box or Direct Out on the back of the amp, then just take a clean feed from the “perfectly” dialled in amp you have on tracking day and record that clean signal as well.

Armed with a Radial ProRMP REAMP and that clean signal, you have the option to change the tone later in the tracking process, or even at the mixing stage.

OR, set your musician up with something as close as possible in the form of a plugin, and allow you both to focus on the performance safe in the knowledge that you can get the EXACT sound later.

I mentioned mixing. Well, quite often the ideal “performance” sound isn’t the one that’s going to work best in a mix. It might quite often need aggressive EQ or effects to get it to do what you want in terms of balance, tone-shape and space.

So, the Radial ProRMP REAMP box allows you to do this IN HARDWARE. Set up a separate channel, send it out to the amp/speaker, and then you can adjust the amp placement, amp settings, mic placement, playing and sculpting the sound using the amp/speaker against a mix-in-progress.

All during which it’s not in a plugin, it’s in a real environment… and AS IF if the recorded musician is still standing there playing their perfect take.

Having the ability to reamp later also means you can record instrument tracks anywhere at any time, at home or on the road for example – grab your bus-powered interface and let rip on the back of the bus.

A Marshall stack somewhere will be happy to furnish you with an eye-watering tone sometime in the future.

Another benefit is being able to take your tracks to another place/studio (or rent/steal/borrow gear to bring in for mixing) so you can use other amplifiers with different attributes.

To summarise: having a reamp box in the cupboard/drawer/rack opens up a huge degree of flexibility when it comes to tracking instruments.

But the Radial ProRMP REAMP is just for bass/guitar or other instruments that use an amplifier right?

Well here’s the headline news. NO!

Buying one these changed the way I approach not only tracking, but my entire strategy to mixing. I can now take ANYTHING out and re-amp it.

Not just guitars, basses or instruments with pickups. I can grab tracks from drums, vocals, summed-busses, line-level keyboards, ambient effects, ANYTHING… and come back out of the system in the form of a 1/4″ jack as if it has come from an instrument.

This isn’t just a tool for recording stuff later…

Take ANY pre-recorded track and plug it into an amplifier, put a microphone in front of it, and play it back in… with all of the loveliness of amp, microphone, the air-in-between, preamp (and drive) maybe compression, on the way back in.

Use any “real world” organic effect, pedal, outboard unit, speaker, or space. Put a vocal through an amp in the corridor and mic the other end and you’ve got an interesting unique chamber reverb.

Go crazy. Put a drum bus through a bass cab and a wah pedal. WITH A FLANGER. Oh yes…

My Radial ProRMP REAMP box is now fixed (thanks to magic of velcro) into my rack and permanently routed through my DAWs I/O assignments so I can get to it as quickly as possible. When inspiration strikes (or even better when it doesn’t!) I can grab a jack lead and an amplifier and get creating…

In a world of homogenised, crystal-clear digital audio recording, the methods of reamping provide a rich palette of real, unique, warm analogue sound that you can apply to any programme material.

If you record, produce or mix music, I cannot recommend enough grabbing one of these reamp boxes – and discover its limitless creative possibilities.

Here’s a link to Radial product page for more specifications and information. And here’s a video explaining their 4 different re-amp boxes:

DISCLOSURE – This article is NOT an advertorial. We bought the Radial ProRMP REAMP indirectly from Radial at RRP and have no relationship with the manufacturer whatsoever. This is just a good old-fashioned review! Written by The Beat Shed session drummer, Merlin Matthews.