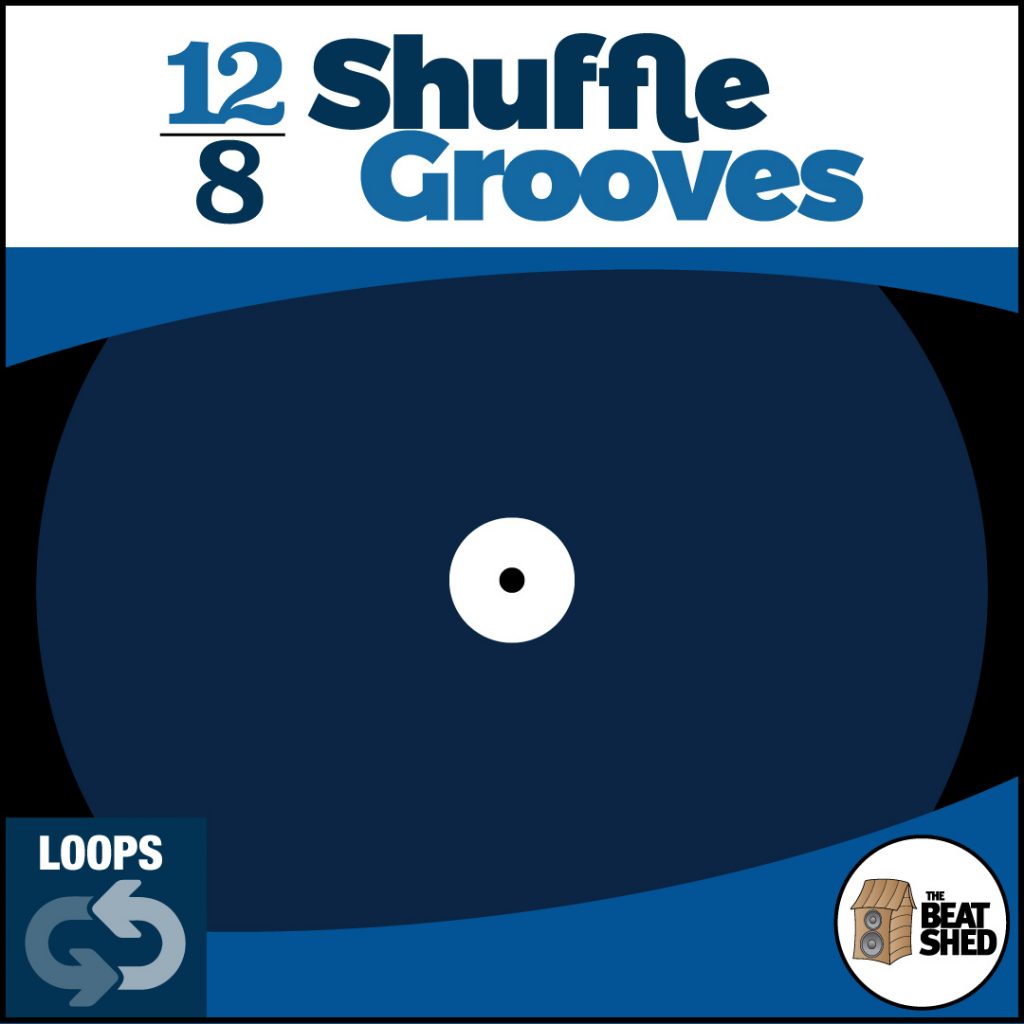 Take 149 Purdie shuffle loops played at 4 tempos and articulated (mostly) on hats, hats with crash, ride, then ride with crash…

Way back in October 2019 we released Free Beat Friday #2. It was a 12/8 half-time “Purdie Shuffle”. Since its release, we’ve had a SHED TON of enquiries about producing a dedicated 12/8 drum loops pack… Well it’s arrived.

Here’s some examples using only the stereo WAV files 12/8 drum loops pack with fills and percussion. NO additional editing or effects were used…

Bernard Purdie is a celebrated drummer for many good reasons. Not least for his signature use of triplets against a half-time backbeat: the “Purdie Shuffle.”

He played and re-invented these funky, swinging 12/8 shuffle grooves on many recordings. “Babylon Sisters” and “Home At Last” by Steely Dan being the most obvious examples.

The beauty of the Purdie Shuffle is that dividing by 3, 4 or 6 becomes “naturally” available without sounding like you’re cutting across the groove. Even though it’s quite complex, an audience can still feel and comprehend it – tapping their feet to its obvious pulse.

Here’s the man himself, breaking it down in his own words…

John Bonham then took up the 12/8 baton. He re-created the Purdie Shuffle with his own twist on Led Zeppelin’s “Fool in the Rain”. With a modified kick pattern, it lost none of it’s groove but added power and a busy tom/cymbal pattern to it.

The Purdie Shuffle groove has no business being played at 172bpm… Unless it’s 1982 and your name is Jeff Porcaro.

He re-RE-invented the groove for the Toto’s “Rosanna”. Here’s the man himself demonstrating the evolution of the 12/8 half-time shuffle.

We thought long and hard about which 12/8 drum loops would be most useful and versatile for different styles of music. Then we studied the great 12/8 shuffle grooves played on famous recordings and selected a broad range of tempos. Whilst recording the grooves across the range of tempos, we then added extra, more tempo-specific grooves.

120BPM – Getting pretty funky now, we’re in the Purdie Shuffle zone –  Steely Dan’s “Bablyon Sisters” hangs around this kind of tempo. Some open flowing fills are nice at this speed too.

130BPM – This is John Bonham territory with Led Zep’s “Fool in the Rain”. Still funky, but much more driving and played with more attack. Again, fills and percussion make a great accompaniment at this tempo.

172BPM – Jeff Porcaro’s classic “Rossanna” Purdie shuffle loops are in here plus some variations. Fill loops didn’t make much sense at this crazy tempo so we skipped those, but there are a set of percussion loops that work nicely.

The first few beats at each tempo are the same. WHY? When we say that the Beat Shed is about “boutique drum recording”, this is exactly what we mean…

A drummer doesn’t play the same groove at different tempos even if it’s the same PATTERN. Of course you can grab the slice formats (REX/Apple Loops/RMX) and increase the tempo. But you’d be missing the nuance in the way the drummer played that beat at that actual tempo…

As well as the WAV stereo mixes and 24bit multi-tracks, we also produced the 12/8 drum loops in the REX, Apple Loops, and Stylus RMX formats.

These files are variable tempo versions of the stereo mixes. They have been carefully sliced and tested to stretch to the tempo of your project. These 3 formats cover just about any software or workstation you may be using.

For more technical information, and to check which format to use with your system, visit the formats page.

We recorded 12/8 Shuffle Grooves with a wide range of microphones. Industry standard, weird, wonderful and some custom “modded” microphones. These microphones ran through Neve-style 1073, JoeMeek and (super-clean) Focusrite pre-amplifiers.

The mics were placed as described in the specifications below. For (even more!) detail, take a look at the full specification sheet.

Modern Funk Kit is a samples pack containing hits recorded in the same session as 12/8 Shuffle Grooves. It is available as bundle or as a separate samples pack…

“Modern Funk Kit” was recorded in the same session as “12/8 Shuffle Grooves“. For that funky swinging feel, we selected a detuned kick drum sound, toms that were warm and resonant, and a fairly high-pitched snappy snare drum.

To get the widest range of funk drum samples, we went for 5 velocities on each voice/articulation, more than we’ve previously recorded for any sample pack.

Another first with this kit is that we’ve recorded samples of the kick with the beater buried in the head AND the beater coming off the front head.

The 12/8 groove has so much feel in the kick drum that we wanted to present these 2 options of kick sound:

We have created sampler patches that “map” the voices and velocities to different keyboard note events.

Simply load the correct format into your software sampler, and you can play beats using your keyboard, or programme beats in your sequencer.

We created sampler patches in the following formats: