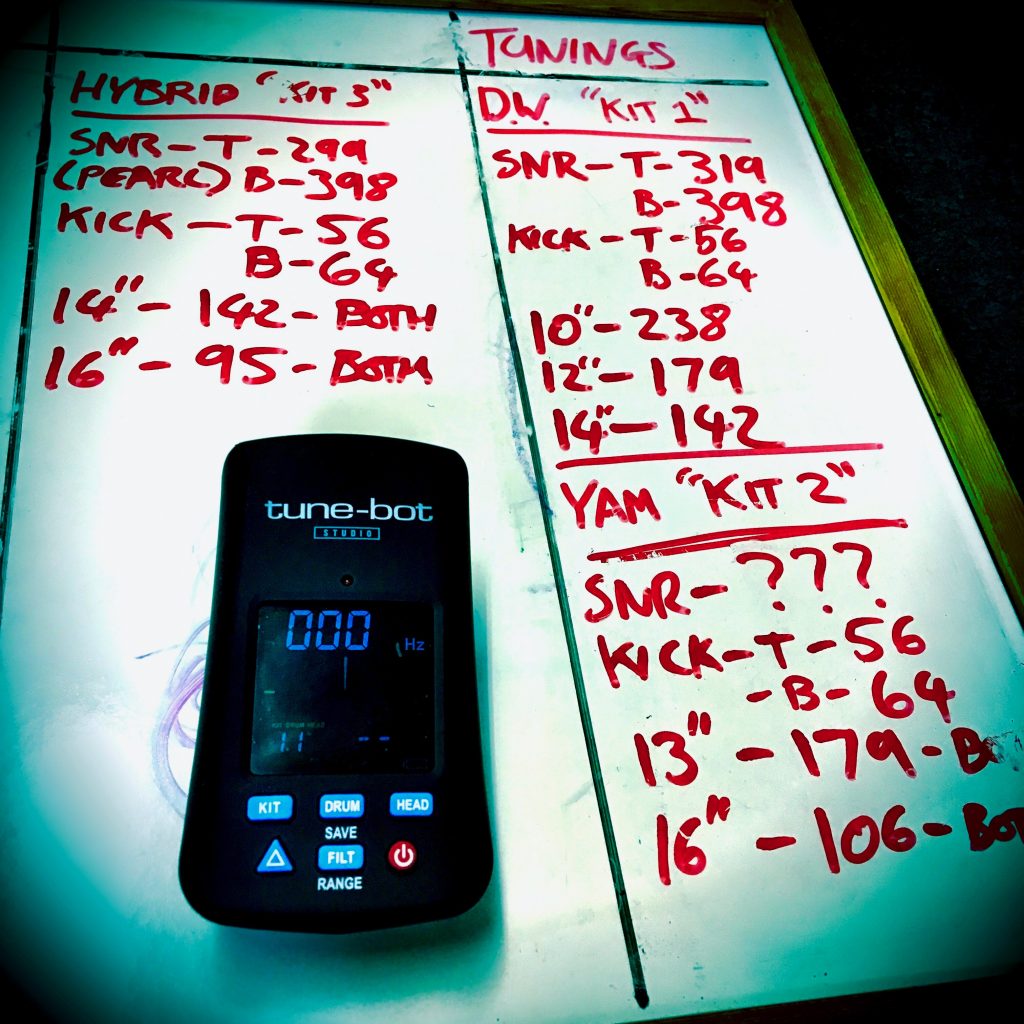 …or so I thought until I bought this little piece of wizardry.

FULL DISCLOSURE – This is NOT an advertorial. We bought the product from a retailer at RRP and have no relationship with the manufacturer whatsoever. This is just a good old-fashioned review – a Tune-Bot drum tuner review at that!

In the interests of doing a drum tuner review, I decided to test the Tune-Bot against myself. I took a pretty average old 13′ tom, took the heads off, reseated them and tuned it up as best and as precisely as I could. It sounded great. Clever me!

Then I clipped the Tune-Bot on and went around each lug matching the frequency within 2hz. I hadn’t done too badly, but there was one tuning rod that was quite a bit flat (-8hz).

As I tuned-up this one single rod, the drum SUDDENLY came to life! The shell was singing!

The gizmo had gone beaten me. Bastard.

The Appliance of Science

In essence, the Tune-Bot is a tuner with a microphone that clips to the drum rim and precisely measures frequencies. It can also filter frequencies to make tuning easier. The ingenious on-board software helps you get consistent tunings across all tuning rods, and you can save all of your tunings for up to 10 drums assembled across 5 different kits.

Every drum shell has a pitch (or fundamental) at which it naturally resonates. Depending on the nature and quality of the shell, you can push these tunings around a little, but there is always a sweet spot. What the Tune-Bot allows you to do is get the top and bottom heads to PERFECTLY match this magic pitch.

With both heads and the shell in scientifically perfect harmony, you can make a fairly cheap drum sound like an expensive one.

I could try and explain here how to use it, but it would read like a guide to Chinese algebra.

Instead here’s a video showing how it is used –

There is an app for the phone (or visit the website) that, based on inputting drum dimensions and desired pitches, spits out the “correct” numbers (frequencies) to set the Tune-Bot to. It can also save settings in a similar way to the onboard memory on the unit itself. So you can really knock yourself out with some right proper tuning nerdery…

As described above, getting the top and bottom tom heads spot on with each other and the shell itself works wonders. If you want to get a bit more fruity with your tom tunings, you can pitch the top head up slightly – the note will bend down as the note decays – or experiment with bottom head tunings until you’ve gone deaf.

Snares and bass drums are tricky beasts, and there’s as many ways of tuning them as there are drummers who spank them. But they usually require different tunings between the 2 heads.

With the bass drum I just removed all muffling and dampening, stuck to the numbers, then put it all back again. The Tune-Bot app wanted the batter head VERY low with the display head very slightly higher.

The results here were extraordinary. There were resonant frequencies coming out of my old Yamaha kick drum I’d never heard before.

The snare top head was simple enough. But the bottom was a different story.

Due to the paper-thin nature of a snare resonant head, and the fact that they tend to be tuned tighter than a duck’s chuff, it can be extremely difficult to detect the pitch correctly.

(I think this goes a long way to explaining why a lot of snare drums you hear out in the world sound a bit …err… rubbish.)

This is where one engages the Tune-Bot’s “Hi-Range” filter to help it pick out the frequency. I say help, this head can still be a bit tricksy, but with a bit of perseverance you can get readings and get the resonant head bang on.

Again, the result was staggering. The snare sang like a 12-bore rifle.

The unit itself manages to make a complex task as simple as it can possibly be. If you’re like me and struggle with numbers, having 3 figures per drum, up to 10 drums, across 5 different drum kits is a head-churning prospect.

The Tune-Bot interface is brilliantly designed to make navigating these numbers relatively simple. The fact that they managed to get so many functions and parameters into only 6 small buttons demonstrates that some very clever sausages have spent some time thinking it through.

If a proper review has to have a negative, then here’s two.

The clip, although designed to sit on any drum hoop, can be a little unstable and it isn’t entirely obvious at what angle the unit should sit. You obviously don’t want it resting on the head, but you don’t want it flat either. This can take a bit of fettling, and even then it can fall off.

I also found that with bigger drums, particularly the bass drum, the microphone wasn’t picking up the readings from the opposite side to where the unit was clipped. So I had to pick the unit up and walk it around the drum as I was hitting. This then means you need 3 hands to tune the drum. Or learn to use a drum key with your foot.

But this is nitpicking.

If an accident were to befall this little gadget, if it were to be launched optimistically in the direction of a lead guitarist mid-solo, or it were hoofed into a wall amongst a red-mist of drummer’s rage, then the first thing I would do is get online and order another one.

I don’t think I could give a better testimony to a piece of equipment that has now become a Beat Shed studio essential.

The Tune-Bot is a bit of a game-changer. It has certainly changed the way that we work at The Beat Shed.

We’ve always spent time tuning. We now spend a bit more time tuning – I wouldn’t describe the Tune-Bot as a time saver! – but the drum sounds have benefitted from this investment of time, and so have the recordings. Plus we can now save settings so that replicating an exact drum tone in future is even easier.

If this all sounds a bit geeky and a little bit complicated, that’s because it is. But it’s thanks to this type of arse-clenching attention to detail that you can get a pretty ordinary set of drums to sound exceptional. And a special set of drums sound their absolute best. So the pay off is pretty huge.

If you’re a bit of a nerd and/or perfectionist and/or professional, or someone who just wants to squeeze the absolute maximum from their drums and their tone, then this is definitely one for you.

Or maybe you’re just sick of sitting there watching other musicians fiddling with their tuners and want a piece of the action….

FULL DISCLOSURE – This is NOT an advertorial. We bought the product from a retailer at RRP and have no relationship with the manufacturer whatsoever. This is just a good old-fashioned review!